The 215,000 square foot, enclosed mall is situated on 17 acres located near the southeast corner of Highway 111 and Monroe St., in Indio, CA. Indio Fashion Mall was 30% leased at the time of sale.

“We are pleased to continue our 30-year working relationship with the City of Indio and are excited about the opportunity to revitalize the Indio Fashion Mall, which has historically been the most important shopping district for the citizens of Indio as well as the entire East Coachella Valley. Good things to come!” said Alexander Haagen III.

Haagen Company plans to redevelop and expand the location into a vibrant retail, entertainment and dining destination attractive to both local residents and tourists.

A rendering of the redevelopment concept.

The design will include space suitable for community events and public gathering spaces. Landscaping, always a hallmark of Haagen’s projects, will be prominently featured throughout the project. The adjacent 20 acres of undeveloped land, owned by the City of Indio, is anticipated to be incorporated into the new development. 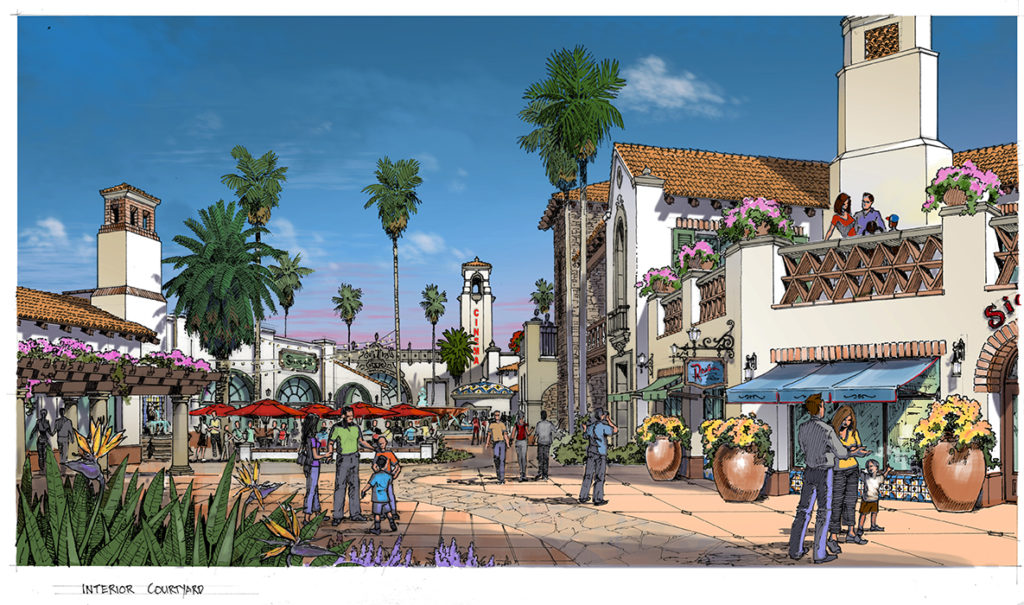 “We are delighted about this project. The community consistently lists the Indio Fashion Mall site as a top priority for rejuvenation. We are grateful that Alex Haagen and the Haagen Company has the confidence in Indio to make this substantial investment in our future,” said Michael Wilson, Mayor of Indio.

The Indio Fashion Mall and its retailers will remain open for business while design plans are in progress. Initial cosmetic repairs and improvements will begin to upgrade the mall even during the planning phase. The company expects to begin the first phase of redevelopment in 2019.

Haagen Company has been investing in the Coachella Valley since 1987. Their first development was the Empire Polo Club in Indio, CA. Haagen Company also has land holdings in Indian Wells, Coachella, Thermal and Hesperia in addition to retail properties in Redondo Beach, Harbor City, Highland, Inglewood, Los Angeles, Beverly Hills and Goodyear, AZ.

Haagen Company, headquartered in Los Angeles, California is the successor to the Alexander Haagen Development Company, which, during the late 1980s and 1990s was Southern California’s largest retail developer. In its 50-year history, Haagen Company has been, and is responsible for, the development of more than 16 million square feet of retail space. Many of Haagen’s projects, which include more than 140 neighborhood, community, promotional and regional centers, feature a blending of off-price retail shops, family-style restaurants and entertainment in a quality retail environment.